Earlier this summer, I attended one of the Executive Task Force’s Town Hall Listening Sessions. It was fascinating – lots of people with lots to say. In the months since then, I have continued to ponder some of the opinions aired and assertions made there. One in particular has remained with me because, although it may be true, it rests on unsettling assumptions about the nature of children and education.

The argument has to do with the role of memorization in school. The speaker began by referring to having forgotten information she memorized early in her own education, such as state capitals, in favor of information required later, such as algebraic formulae. Since it is so easy to look up nearly anything, she posited, less emphasis should be placed on memorizing and more emphasis placed on thinking critically. After all, she pointed out, “How many of us even today have looked something up on our phones?”

I cannot track down the speaker and ask her, so I cannot know exactly what she meant by “less emphasis on memorizing.” However, I have heard this sort of argument, or variations of it, before. It was either expressed directly as an educational position (such as at the Listening Session) or expressed indirectly in the course of conversation with administrators or teachers about my own children’s education (“Oh it’s okay that she doesn’t remember those dates; she can easily look them up.”).

At least three assumptions underlie this argument: one, information which can be looked up need not be memorized; two, memorization and critical thinking are opposite or at least competing faculties of the mind; and three (less of an assumption and more of a position), the nature of the information, not the nature of the individual, is the main factor in the decision about what or whether to memorize.

To return to the comment mentioned above, in point of fact, the speaker is right: probably most everyone in the room had looked something up on his or her phone – if not that day, then the previous one. And I assume that she meant we had looked up a piece of information which we might reasonably be expected to have learned at some point – the meaning of an obscure word, or the capital of Oregon – as opposed to information that is subject to change – like a weather report.

Consider where this line of thinking can lead. If we ought not bother to memorize what we can look up and if, in the world of the Internet, we can look up any word, date, concept or synopsis imaginable, then is there anything we should bother to commit to memory? The names of loved ones, maybe, because everything else is on the Internet? Obviously, this is ridiculous. It is surely not what this speaker intended. But if that is the case, then this assertion has no place in a discussion about curriculum. We should not decline to commit something to memory simply because it can easily be retrieved elsewhere. There might be a sound argument for limiting or changing what is memorized in schools, but it does not begin with “we can just look that up.”

Second, inherent in this argument is the idea that memorization and critical thinking somehow compete. I acknowledge that, to a certain extent, they do – there are only so many hours in a school day, and what is dedicated to one activity cannot also be dedicated to another. But the either-or dichotomy is false: memorization and critical thinking are not entirely separate. Critical thinking requires contemplation, and one cannot contemplate what one has not committed to memory (for this realization I am indebted to Andrew Kern of the CiRCE Institute in his conference presentation “The Ethics of Memory”). A student cannot compare or contrast the French Revolution to/with the Russian Revolution unless he or she already knows quite a few facts about each. To speak of one thought process versus the other is like saying, “we need to stop working with all these bricks down here in this hole in the ground and instead get busy putting up some floors and walls.” As a house must rest on a foundation, so critical thinking must rest on a broad foundation of facts about the world – some of which simply must be memorized. The argument for balancing memorization and critical thinking, if speaking of them separately is even valid, cannot proceed from the notion that critical thinking is expansive (good), memorization simplistic (bad), and we must limit the bad to make room for the good. 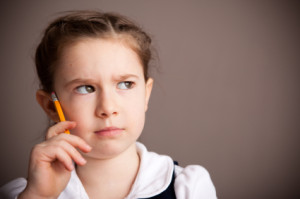 Both of these previous assumptions ask a specific type of question about what to teach and possibly to memorize: is it vital, is it useful, is it otherwise readily available? Utility and retrievability of the information are key. These two criteria leave out so much of Western cultural heritage, though, as to be almost useless. Few would dispute that multiplication facts are useful; what about the Gettysburg Address? Is it useful? Is the Declaration of Independence useful? Is poetry useful? Shall we really only consider memorizing what is useful or not readily retrievable? Is utility all we value?

Furthermore, the argument rests on the notion that “room” in a child’s mind can become overtaxed so we need to use it wisely. We speak of a child’s mind being “full,” or (as did the speaker that day) of having forgotten one body of information in favor of another, as though there were a fixed amount of memory available. All of which betrays our saturation in the world of computers, which can become full – or at least slow – when burdened with more information than their memory can handle. Is that really what our minds are, a form of machine? If we seek a metaphor, is not the mind of a child more like a muscle than a machine? A muscle to be developed, trained and exercised? And this, I think, is why the “utility of memorization” argument strikes me as a bit sad. What does it say about our view of children?

To say that a child does not need to memorize the Gettysburg Address may be, strictly speaking, true. She can look it up. (Just for fun, I tested this. Jumping over from word processing to the Internet, I was looking at the full text of the Gettysburg Address in . . . 19 seconds.) But what if, instead, she had memorized it? First, she would have internalized a succinct, eloquent and masterfully crafted piece of language. Not only that, her understanding of dedication or consecration or sacrifice would be shaped by having memorized and contemplated the Gettysburg Address – much more than if she had simply looked it up.

Finally, not only can a child be transformed by what he memorizes, a child can be transformed because he memorizes. Memorization is not merely an exercise in the practicing of a skill; it is an exercise in discipline of the mind and of the will. I took piano lessons for seventeen years, and over the course of those years, I memorized dozens and dozens of pieces of music. The process of memorizing usually went something like this: I would initially remember little bits here and there – the parts of the piece that I especially liked, or the parts that I had to take extra time to learn. I also usually memorized the beginning of the piece fairly readily; I could start playing without the music, but then my memory would fail me. This was what my teachers called “finger memory” – a physical, muscular form of memory born out of habit. Not until I engaged my will in a deliberate, conscious study of how the piece was put together could I build a reliable knowledge of the piece that would stand up even if I made a mistake part way through.

Would children not benefit from any educational activity that required them to engage and master their will? Is not the development of a disciplined, well-ordered, nimble mind one goal of education? (If it is not, then that is an entirely different consideration.) Should we forgo the opportunity to develop a child’s mind because that mind might be bested in a race by a device we have created?

Exactly what or how much to memorize might be open to debate. And although some children will seem to be more successful than others – in either the short or long term – nearly all children would benefit from the challenge and the exercise. Above all, the determination of whether or what to memorize should be made by asking ourselves who we consider our children to be, what we want them to contemplate, and what key cultural artifacts will most deepen their understanding of any given subject. We should not settle for asking, “Can they look it up?”