The Partnership for the Assessment of Readiness for College and Careers (PARCC) test scores are in for grades 3-8 and they are absolutely abysmal. Parents that were courageous enough to refuse the test will be glad they did! The AR Department of Education says scores for grades 9-12 will be distributed in print in a couple of months. The cut scores were determined by the PARCC Consortium, not state education leadership, though this invalid approach was approved by the current Arkansas State Board of Education. A score of 4 or above is considered meeting or exceeding expectations. The PARCC test is gone now, having been replaced by the ACT Aspire.

The math results show that only 31% of all 3rd graders in the state met or exceeded academic expectations. As the grade level increases, the scores get worse. Only 24% of 4th and 5th graders passed and only 17% of the 8th graders passed. The report for the English Language Arts (ELA) exam shows that only 29% – 35% of the students passed the exam, depending on the grade level.

Here are 2 reasons for the horrific scores:

1. The ELA test itself was invalid and technically flawed. The server was constantly crashing, it required computer navigation skills that were above grade level, and the wording of the test questions was not aligned to grade level. We cannot correctly ascertain a student’s mastery of English Language skills when the computer crashes several times while trying to type an essay, with keyboarding skills they don’t have, answering questions they cannot read. The test was an airplane being built in the sky and was never validated.

2. The students were tested on a failed set of math standards. The Common Core State Math standards that PARCC tested are known as Constructivism. It is based on abstract thought and found to be developmentally inappropriate for elementary students by countless early childhood specialists as well as the National Math Advisory Panel. When we ask young children to perform skills they are not wired to do, this is the result. When we execute math approaches that have failed for over 80 years, we should not be surprised by failing test scores. Further, the changes to middle school math and early algebra are also seemingly a disaster based on the 8th grade passing rate of 17%. Clearly these standards are not preparing our students for advanced math classes. If Arkansas has been using the best standards since sliced bread for the last 5 years, how does the Arkansas Department of Ed justify this monumental failure to educate our children?

The Arkansas Department of Education and its crony lobbyists (The Waltons, The Chamber of Commerce, Arkansas Learns, Forward Arkansas, Raise our Grade, The National Governor’s Association, The NEA, The Council of Chief State School Officers etc.) will argue that these scores finally expose what they, as an education oracle, have known all along: the fault of our local schools and teachers.

The truth is that the local schools, their boards, their teachers and parents have had these failed standards, tests and policies shoved down our throats against our will and this kind of monumental failure is the result. Our students performed better, in fact our nation performed better, when schools were kept small and local and big business minded their own business. Now our kids have lost 5 years of solid education that they will never get back. 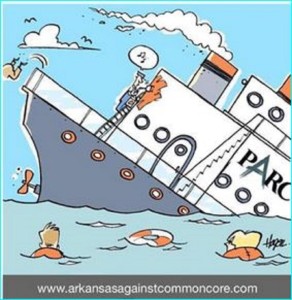 The Arkansas Department of Ed now wants to remediate 70% of the students across the state with an Academic Improvement Plan (AIP). An AIP typically results in pulling a student out of their usual class and providing them tutoring (in person or online) on the topics they are behind in. Other schools provide tutoring before or after school or simply send worksheets home. In Commissioner Key’s words, ” Examples of interventions may include computer assisted instruction, extended school day, tutoring, learning labs within the school day, Saturday school, and double blocks of instruction in the subject area where assistance is needed.” Further, how are they going to evaluate the effectiveness of the AIP now that the PARCC test is gone and there is nothing to compare the previous results to?

So now parents will have MORE homework to cry over at night or their child will miss valuable classroom time repeating the same FAILED Methods that led to these miserable scores in the first place. Schools will now be faced with an unfunded mandate to provide more interventionists and software. I suppose now the AR Dept of Education will ask for even more money in the next fiscal session. despite the fact that they already get about half of the entire state budget.

Commissioner Johnny Key, in an effort to get ahead of the massive, inevitable parent and teacher revolt, issued a letter assuring parents that, “Having an AIP does not mean your student is being labeled in a negative way.” Ironically, when parents refused to take the PARCC test, we were subjected to Gestapo-like threats of an AIP as if it was a black mark on our student’s record! Now, all of a sudden, the AIP is a good thing and nearly the entire Arkansas student body in grades 3-8 will have one anyway.

The 4 Assurances of the Race to the Top Reform: National Standards & Tests, Teacher Evaluations, Charter Expansion and Student Data Collection are centered on a theme of “accountability.” The argument has been that local schools and teachers must be held accountable for their failures to educate our children. Now that the schools have been executing the policies of those who think they know better for 5 years, and we have the lowest achievement scores in 25 years, who will hold the state Department of Education accountable? The Arkansas Department of Education gets approximately 50% of the state budget and this is what they have to show for it: only 1/3 of the students in 3rd-8th grade being properly educated in ELA and less than 1/4 properly educated in Math.  Stop Common Core.

The Truth About the Reading Bill SB349